The Easiest Treatment of Valley Fever

The term ‘fever’ is one of the most commonly used terms in our regular lives. The inhabitants of the southwestern United States or various other parts of the world are susceptible to another type of fever- ‘valley fever’. After getting attacked by valley fever, the signs and symptoms usually go away automatically. However, medicines are also available to treat its symptoms. 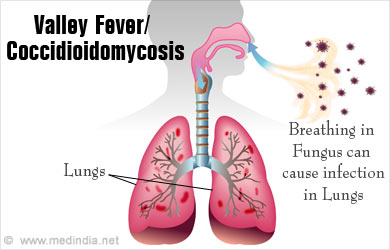 Who is more susceptible to valley fever?

The risk of valley fever is more in the following scenarios:

African-Americans, Filipinos, Native Americans, or Hispanics are more susceptible because of their genetic reasons.

If valley fever signs and symptoms start appearing, then getting recovery from these signs might take several months, however, the recovery time depends upon the overall general health of a person. It’s also dependent on the counts of fungus spores that have affected one’s lungs.

In case the signs don’t go away automatically or if you don’t get treated, then the issue of valley fever might be proceeding towards pneumonia of long-term. It primarily happens in individuals with the weaker immune system. The signs and symptoms in this regard are an unexplained loss in weight, coughing with blood and mucus, chest pains etc.

Valley fever basically has no requirement of medical treatment. The otherwise healthy people should take sufficient bed rest and fluids. However, consultation with a doctor is important because he/she will examine you from time to time about your progress. Nowadays, valley fever natural treatment is also quite popular and you can ask your doctor about this mode of treatment.

In case the symptoms of valley fever start getting worse, your doctor would more probably prescribe a medicine that will attack the illness developed by fungus. Valley fever can also take its most extreme form when people get attacked by meningitis. In this case, medication for the lifetime might become necessary.